Once the design is created, Greenberg lays the tiles out in place, face-mounts them with plastic, cuts them into sections, and numbers them.

Two challenging hand-made mosaic designs by Portland’s Ruth Frances Greenberg (rfgtile.com) have recently been installed in a Portland residence by Hawthorne Tile. The precision of the design and process of installation initially challenged Hawthorne Tile when the tile contractor set Greenberg’s mermaid mosaic in the bottom of a pool in summer 2017. But once the owner saw the beauty of the expertly installed pool mermaid, she immediately commissioned a Ruth Frances Greenberg backsplash for the pool house kitchen.

Bringing a mermaid to life

The 14´ diameter mermaid project involved “pretty intense logistics,” said Travis Schreffler, project manager for the install. He explained that after the tiles are made by hand, fired and then re-fired for exterior use and the design is created, Greenberg lays the tiles out in a huge circle and face-mounts them with plastic, cuts them into sections and numbers them. They are then placed on pieces of cardboard to deliver them to the jobsite. 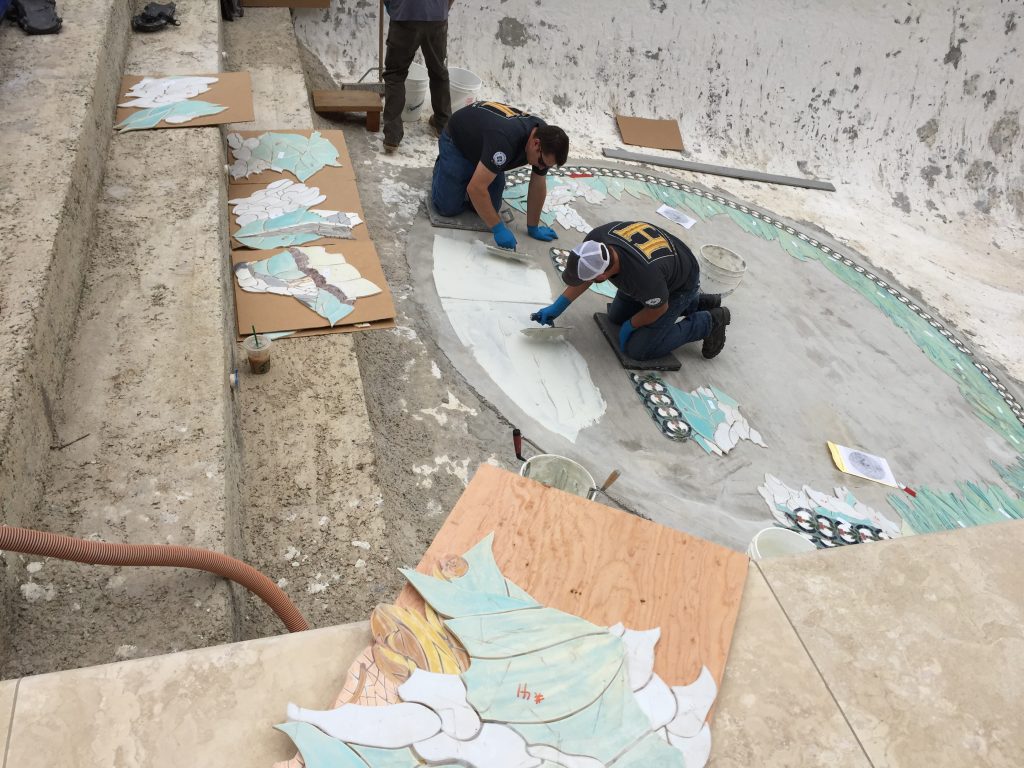 The crew, with Schreffler, three Certified Tile Installers and two apprentices, started early in the day while it was cool to keep the ARDEX X77 thinset viable. 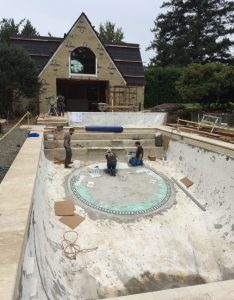 Compounding the difficulty was the slope of the pool – it sloped from the shallow to deep end on a radiused arc rather than on a straight plane.

That required Schreffler to build a map to clarify where the design was going – it had to be laid out and put back together like a puzzle. Compounding the difficulty was the slope of the pool – it sloped from the shallow to deep end on a radiused arc rather than on a straight plane, so it was a perfectly flat curved arc: an intersecting plane that was flat in one direction and arched in the other. 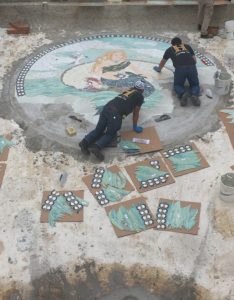 The team assembled the pieces in one four-hour session to be sure all the pieces fit perfectly.

The bottom of the pool needed to be prepped first with ARDEX AM100 rendering mortar with a radius established based on the arc; then an installer and an apprentice created a series of screeds that followed the pool’s arc. The installation prep took two and a half days.

Each piece of the mosaic puzzle had to be moved down to the swimming pool, and the relationship between the pieces appraised since, as Schreffler said, “each piece relates to the other pieces in that they are loosely mounted, and needs the next piece to be adjusted, like a gear.” This meant that once the installation began, it had to be done in one four-hour take.

The crew, with Schreffler, two other Certified Tile Installers and two apprentices, started early in the day while it was cool to keep the ARDEX X77 thinset viable. ARDEX’s William White was onsite to help with the logistics, providing extremely attentive support, said Schreffler.

There were some nail-biter moments during the install. “Every piece you put down, you felt like it wasn’t going to fit,” Schreffler said, so at times he also jumped in to lend a hand. In the end, the job was done by noon, and left to sit protected overnight. The next day, the plastic was removed, loose tiles reattached, and it was cleaned. Two days after the install, it was grouted with ARDEX FL and was ready for the plasterers to come in and finish up with pool plaster. 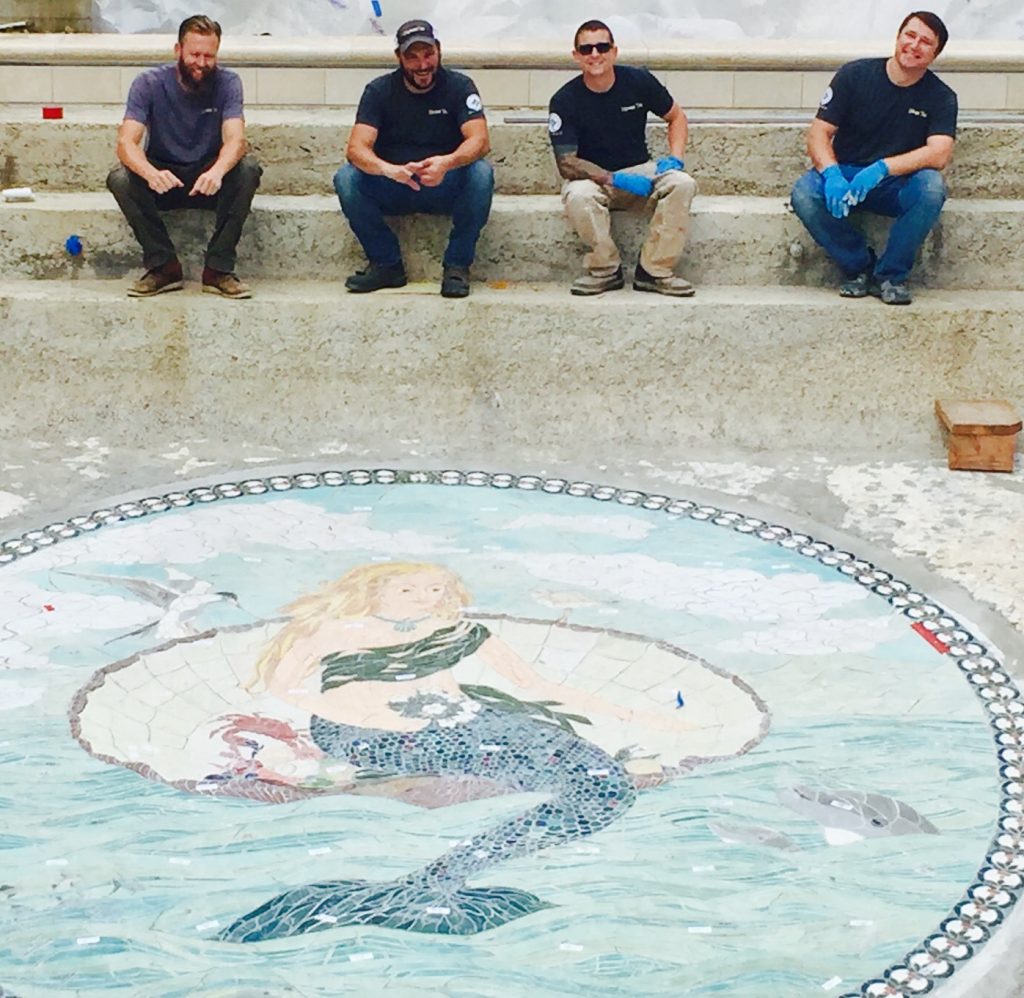 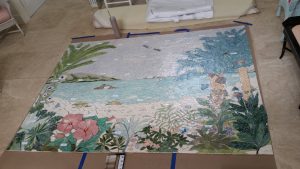 Like the pool project, the mosaics for the backsplash were assembled and numbered.

The mural for this backsplash was a 6´ x 8´ Hawaiian beach scene with breaching humpback whales, sea turtles and tree frogs, again created by Ruth Frances Greenberg. Plus the homeowner had befriended stray cats while in Hawaii, so the mural included them as well.

The process of assembling all the parts and pieces was the same as with the pool, but Hawthorne Tile was now familiar with this system. 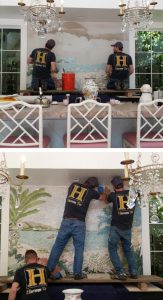 Schreffler said, “Ruth laid them out with me so I knew where everything was to go. She gave me some creative license – with relief flowers and some other pieces. Before the first install in the pool, she never experienced CTI installers before, so the experience for her was very welcoming.”

Again, the mural needed to be installed in one fell swoop, using ARDEX X77 as thinset. “We started this one at 7 a.m. and were done by 11 a.m.,” Schreffler said. This was after the crew spent a day prepping the wall surface to be sure it was flat. “We had the same crew,” he said, “So they knew exactly what they were doing and acted as a fantastic team. They took the bull by the horns, were confident and did a fantastic job, impressing the homeowner.”

This is the kind of work upon which Hawthorne Tile thrives. “We welcome this kind of challenge,” Schreffler said. “Exactly this kind of thing – outside the box – we set out to do this a long time ago. Those moments that feel like you can’t get there from here are extra sweet when you step back and it’s done.” 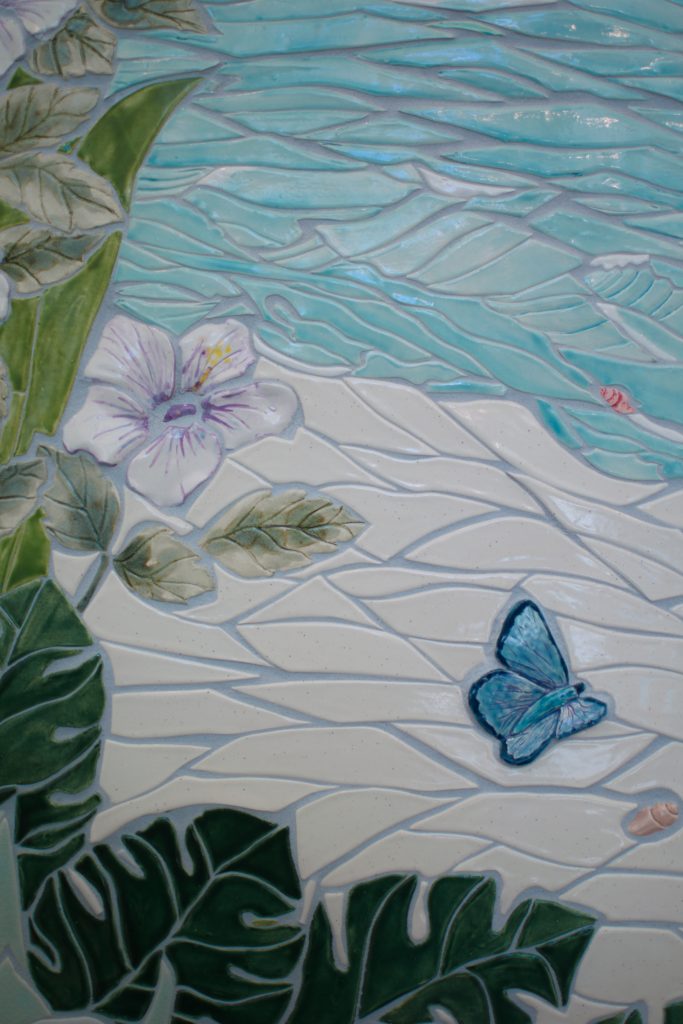 Mural detail. After the CTI-certified install team won the artist’s confidence with the pool install, she gave them some creative license to place flowers and some other pieces at their discretion. 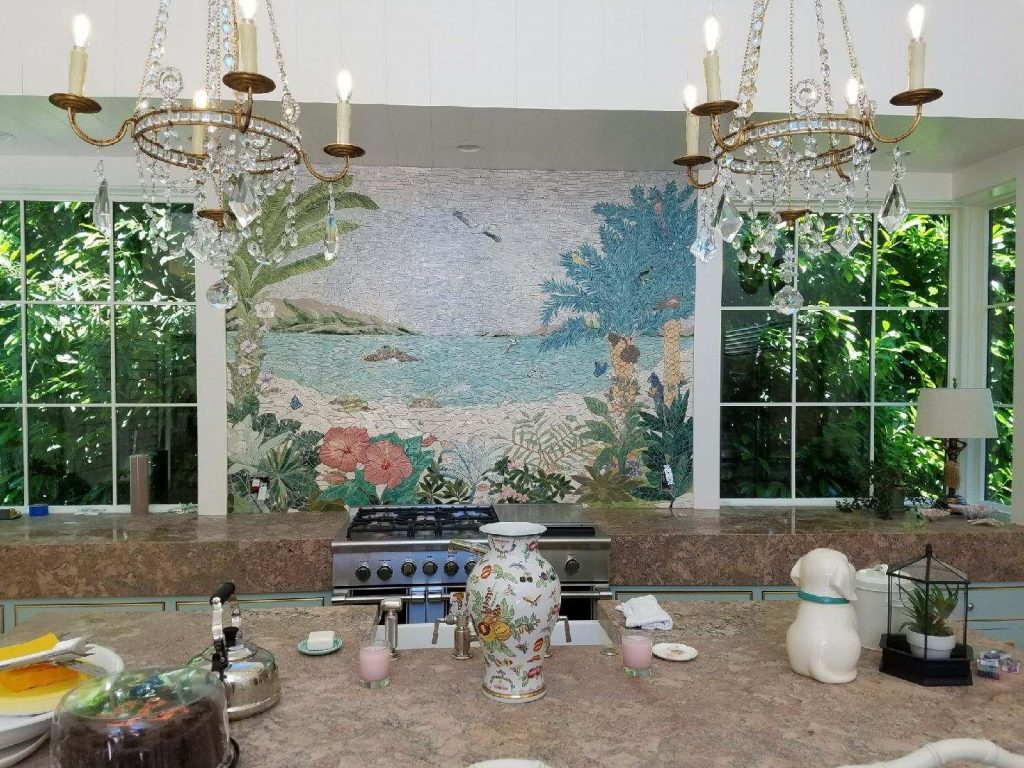