This paper was recently presented at the Qualicer ’18 conference in Spain.

The use of polymer/latex type additives that improve the performance of thin-set adhesives and mortars has been in common and increasing use since the 1960s. For decades there have been occasional references to some of these polymer/latex additives leaching from tile work to cause problematic stains on the finished surface.

As a consultant looking at problems with tile-work over the decades, I have noticed an increase in this specific staining, called “latex leaching” that is sometimes confused with “efflorescence” staining. This staining is far more difficult to treat than efflorescence, but it is easier to avoid. Investigations into this staining have revealed certain changes in products and procedures that are associated with this increase.

This paper does not analyze the chemical aspects of the cause of this staining; rather it explains actions that can be taken by designers, specifiers, builders and tile installers to avoid this problem.

In 1986, a Field Report of the Ceramic Tile Institute of America (86-5-1) titled “Installing Ceramic Veneers with Latex Modified Mortar & Grouts” used the term “Latex Leaching.” In May 1989, Tile & Decorative Surfaces expanded on the issue, opining that “rain is one of the biggest contributors to the leaching
problem.”

The problem was raised again by the Tile Council of North America (TCNA), which reported the issue in the following way, but just related it to excess water mixed with the grout, not the thin-set adhesive. It stated:

“What is latex leaching and dirt deposition? Less common than efflorescence is the white residue that can form on polymer-modified grout if the grout is subjected to excessive moisture before the polymers coalesce. Polymer additives are often added to grout to provide superior properties, commonly improved chemical resistance, reduced porosity, improved flexibility, and freeze/thaw stability. These additives are either already in the grout as re-dispersible powders or are added in liquid form. In both cases, grout mixed with too much water or cleaned too soon, or cleaned with excess water, can cause the polymer to migrate to the surface. In many cases (but not all), these polymers are white in color. When the excess water evaporates, the white polymer is exposed.”

While some minor whitish deposits are likely to come from excess water in the grout mix, the serious disfigurement that keeps returning and which is identifiable by having a clear, sticky component that has a characteristic acrylic odor, is from water under the tile, that carries uncured additive to the grout joints. See photos 1, 2 and 3.

While the problem of latex leaching has been known about for decades, its increasing incidence can be attributed to several changes that have crept into the tile and construction industries over the decades. These changes are:

There has been a world-wide uptake of large-format tiles. 35” x 35” and 48” x 24” porcelain tiles are now commonplace, and the use of “thin tiles” such as Laminam and Kerlite are increasing. These tiles generally have less than 0.5% water absorption, and so water in the adhesive is not taken into the tile back as occurs with twice-fired tiles.

These large tiles are usually laid with narrow joints, usually between 1/16” to 1/8.” This means that moisture in the adhesive is very slow to move to the evaporation point at the joints. This results in slower drying times and slower curing times for the adhesive.

Increased use of latex/polymer additives

More latex and polymer additives are being used because they are necessary for adequate bond strengths to be attained when dense tiles are used. On top of this, the range of adhesive additives has been changing to include water entrainers and retarders, which can slow the cure of the adhesive.

While “thin tiles” (aka gauged thin porcelain tiles or slabs) are installed using smaller notched trowels, it is general for tiles greater than about 24” x 12” to be laid using 1/2” notched trowels, with adhesive manufacturers usually calling for a minimum 1/8” depth of adhesive and 100% contact coverage. Most manufacturers of adhesives also call for large tiles to be “back-buttered” with adhesive, and this adds to the depth of adhesive coverage.

Some contribution to thicker adhesive layers also comes from unskilled tile installations and other construction trades’ workforce. If surfaces are not true and straight, then extra adhesive is required to pack the finished work out to its proper alignment. Preparation trades who fail to provide good surfaces – or tilers who have poor mortar screeding skills – end up using thicker adhesive layers.

Increased use of screed isolation layers/ membranes and uncoupling mats

For a number of reasons, including efforts to prevent efflorescence staining, there has been an increase in the application of waterproofing membranes over the top of mortar screeds. Often the aim is to prevent water entering the mortar screed and leaching calcium stains out. Such a waterproof membrane prevents moisture in the tile adhesive from being absorbed into the screed, thereby delaying curing and drying of the adhesive.

The increased use of other dense layers over the screed, such as uncoupling, or crack-isolation membranes made of bitumen or plastics such as polyethylene, have a similar effect of preventing the absorption of water in the tile adhesive into the screed.

All of the above changes result in slower curing and drying of the tile adhesive. For internal tiling, this is not a great issue. It means wall installations need to have supports left in place longer to reduce creep, until a proper cure has occurred, and floors should not be trafficked for a number of days, instead of the usual 24 hours. But when it comes to external tiling, this slow curing and drying can be a major problem.

This delay in curing is specifically referred to in the TCNA Handbook, which at least since 2011 has stated under the heading Latex/polymer modified Portland Cement Mortar:

“When installing 8” x 8” or larger impervious tiles over a waterproof or crack isolation membrane, or other impervious substrate, longer curing times will be required. A rapid setting latex/polymer modified cement mortar may need to be specified for faster curing. Because latexes vary considerably, the directions of the latex/polymer mortar manufacturer must be followed explicitly.”

Despite this call for the manufacturer’s directions to be followed explicitly, a review of a large number of adhesive product data sheets revealed no mention of delayed curing when dense tiles and the adhesive were used over impervious substrates.

The most ominous warning also comes from the TCNA Handbook, which states:

“When latex/polymer modified Portland cement mortar is used to install ceramic, glass, and natural stone tiles in an area that may not thoroughly dry out in use (e.g. swimming pools and gang showers, etc.) or where initial drying is inhibited (between tile and impervious substrates), it is recommended that the completed installation be allowed to dry out thoroughly before exposure to water. This drying period can range from 14 to more than 60 days depending upon the temperature and humidity and other climatic conditions.”

The issues caused by this delay in curing and drying emphasize the need to specify and use rapid-setting adhesives for all tiling where a delay in curing is likely to cause problems.

The cause of latex leaching 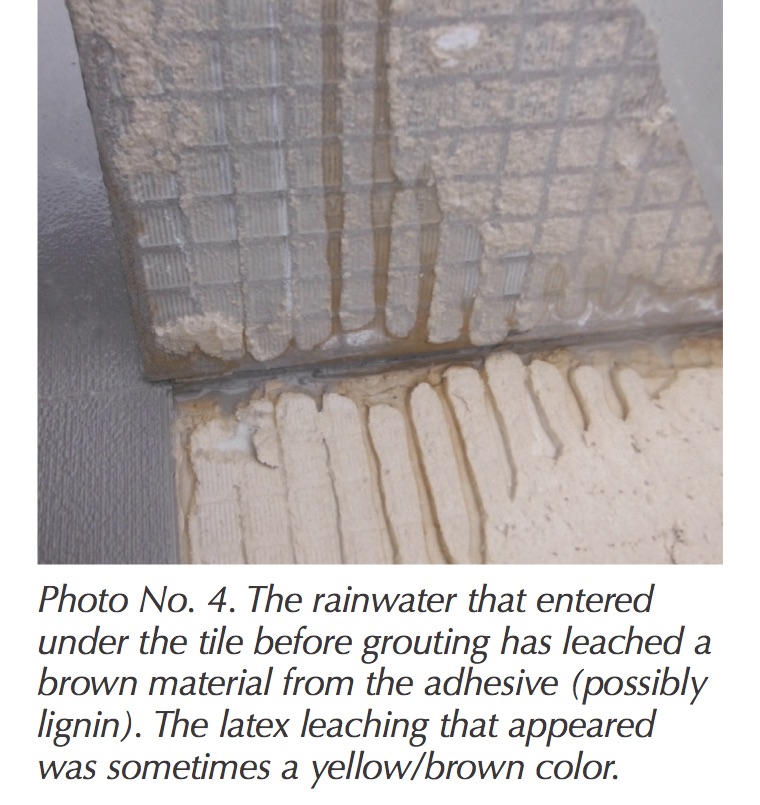 The problem of latex leaching is not widespread on external tiling. This proves that the adhesives, mortars and installation systems used are suitable and meet the needs of the industry. However, under certain conditions, some components of the latex/polymer modified adhesive leach out and cause staining.

Investigations at more than a dozen sites with latex leaching in Australia revealed a common cause. All the instances occurred when rain fell on uncovered and ungrouted tiling. In one apartment complex, rainfall charts and construction diaries were used to show that the four tiled decks that were suffering latex leaching were all exposed to rain before they were grouted. The six unaffected decks at the complex were grouted before it rained.

The lifting of tiles during investigations almost a year later revealed water still trapped in the ribs of tile adhesive. These decks have an acrylic waterproofing membrane applied over the screed. Often, the residual water had caused the tile adhesive to discolor. This discoloration was present where water had access to the grooves in the adhesive, but was not present where the adhesive rib was closed off.

Clearly, grouting the tiling helps prevent latex leaching, since even though the grout would allow some moisture to pass, it appears to prevent rainwater from filling the grooves in the tile adhesive. It appears that this liquid water extracts uncured latex or polymer from the day-old adhesive. The movement of moisture under vapor pressure, particularly when sunlight warms the tile surface, takes it to the surface of the grout joints, where, on evaporation, the residues are deposited.

The same applies for wall tiling applications: grouting soon after installation is important in the prevention of water entry. If the wall has an open top, such as a fence or balustrade, it is important to seal the top, possibly with a capping, to prevent water entry.

So, while water entry into ungrouted tiling may not be the only cause of latex leaching, it is certainly a major contributory factor.

While latex leaching has occasionally been mentioned in professional tile journals for over 30 years, it’s more plentiful today due to changes that have occurred in tiles, tile installation, and construction. These changes include the combination of larger, denser tiles, increased use of latex/polymer-modified mortars and thin-set adhesive, and greater use of membranes and crack-suppression systems under tiles. Under these conditions, the modified cement products take longer to cure, and in some cases, much longer to cure.

If ungrouted tiling is flooded, there is a far greater likelihood of latex leaching occurring, so external tiling should be grouted as soon as possible, to prevent wholesale entry of water into any voids under the tiles. This means covering the ungrouted work if there is any chance of rain. No instances of latex leaching were encountered when rapid-setting adhesive had been used, but the tiling should still be protected if rapid-setting products are used.

The information supplied by tile adhesive manufacturers is generally remiss when it comes to warning about likely delays to curing and setting times when dense tiles are installed over impervious substrates, and no information was found warning that latex leaching could occur if ungrouted tiling was flooded. More detailed information needs to be inserted into specification and instructions underlining the importance of protecting unfinished tiling from rain and flooding. If the tiling is inundated the wet vacuuming and adequate drying time must be allowed before grouting to avoid latex leaching.

There also appears to be an opportunity for chemical engineers to test if some adhesive additives are greater contributors to latex leaching than others. This could allow for the development of superior external tiling adhesives that would be less likely to present with latex leaching.