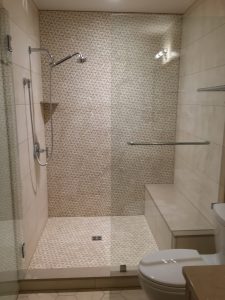 In November 2018, I contributed a technical feature to TileLetter that covers the many advantages multifunctional foam building panels offer tile setters. If you haven’t already, I encourage you to check it out. In this issue I’ll present applications where foam building panels were used to realize those benefits in a condominium development.

The Village of Taos Ski Valley is a year-round resort destination in New Mexico. It was founded in 1955 by a Swiss-German named Ernie Blake, his wife Rhoda, and friends. This group brought a European atmosphere to the historically Native American- and Spanish-influenced area. Taos Ski Valley came under new ownership in 2014, which ushered in a new era of development including new lifts, runs, restaurants, shops, and living spaces. One such example is The Blake Residences, a slopeside six-story building with 24 fully appointed residences including nine penthouse suites with four bathrooms each. Ski valet, heated outdoor pools and hot tubs, fitness center, spa, and other luxury amenities are available. 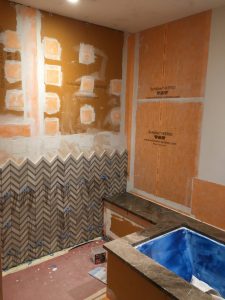 In the shower areas, foam building panels were used on open stud walls while waterproof membrane was applied over existing wallboard.

The builder and the tile contractor

Upfront Construction, founded by President Bob Orner, is the general contractor responsible for interior finishes at The Blake Residences. Zsolt Szilagyi of Homeworks Tile & Natural Stone was contracted to tile all of the bathrooms, laundry rooms, and kitchen backsplashes. Zsolt began work in June 2018 and expects to finish the project in the fall of 2019.

Zsolt chose the Schluter®-KERDI-BOARD foam panels as the primary substrate for the bathroom applications, including the bathtub platforms and showers. In general, this decision was based on the product being very light and easy to work with. For example, he can save time by cutting KERDI-BOARD in the room where he is working, rather needing to go to another area or outside. He finds this process is much faster and requires fewer tools than traditional framing methods. Other benefits are described in the applications’ descriptions below.

Foam panels can be cut to size to create the supports, decking, and apron for the structure, all to the exact dimensions required by the tile setter. Thin-set mortar or adhesive can be used to install the panels, although mortar will provide more adjustability to ensure plumb and level surfaces and square corners. 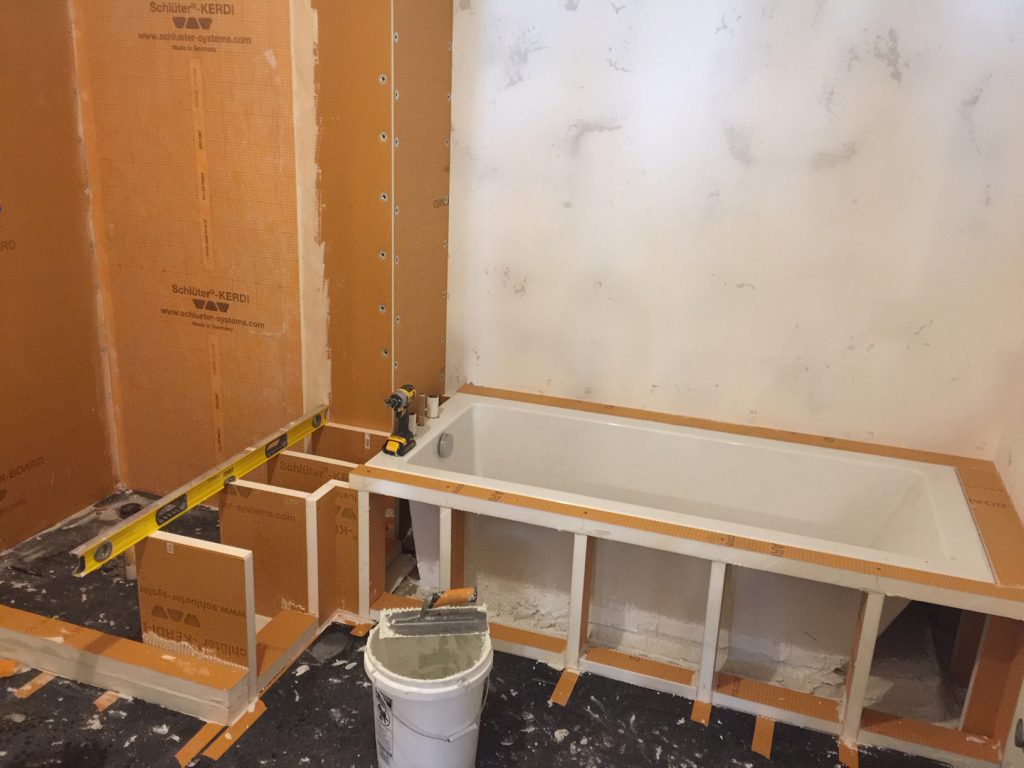 1-1/2” Kerdi-Board legs supported a 2”-thick platform for the tub deck. Blocking was installed on the floor between the legs for added strength and stability.

Zsolt used KERDI-BOARD to build the entire platform surrounding the previously installed bathtub. Thin-set mortar was used to install the 1-1/2˝-thick supports and screws were used as temporary anchors while the mortar was still in the plastic state. In fact, Zsolt prefers to complete construction of the entire platform while the thin-set mortar is still in the plastic state. In this way adjustments can be made throughout the process and he is confident that all connections within the structure are solid. He also installed scrap pieces of board as blocking on the floor in-between supports. While not required in general, this practice provided additional strength and stability of the assembly and reduced waste. Zsolt said when using KERDI-BOARD he “doesn’t throw anything out” meaning the product helps him work as efficiently as possible. Two-inch-thick board was installed on the supports and made flat, level, and flush with the surface of the bathtub. 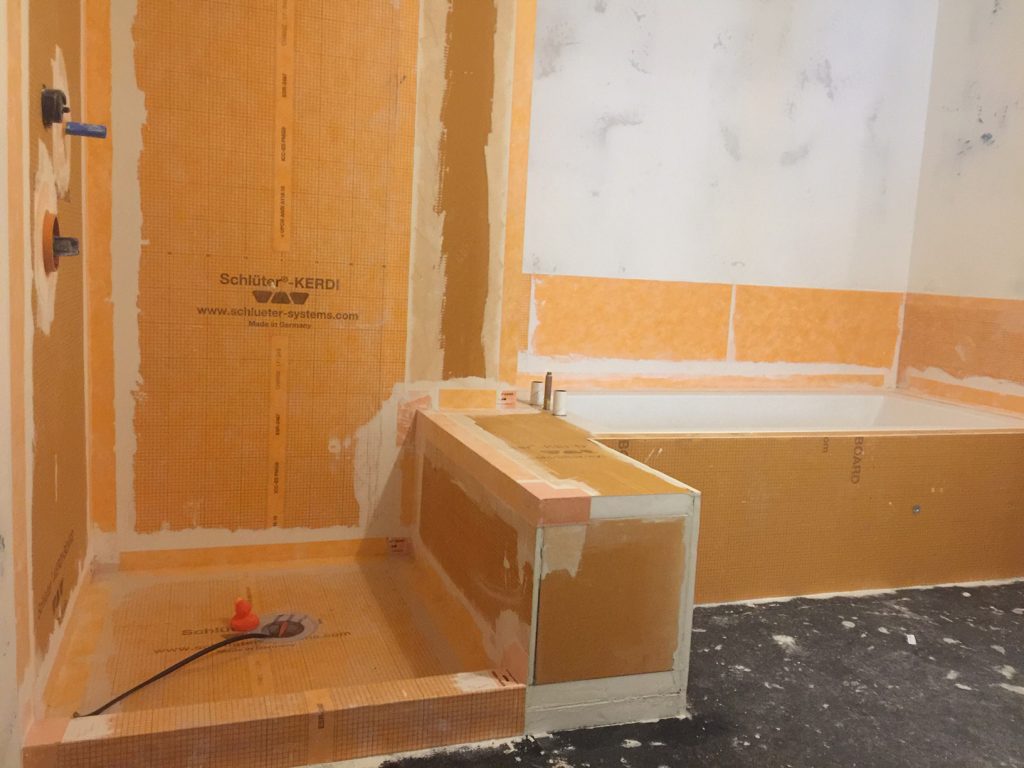 Benches and tub decks were built to the same height – flush with the top of the tub. Waterproofing membrane was wrapped from the wall to the tub deck to create a waterproof splash zone for the tub area.

Granite slabs were installed leaving a 1/4” reveal on the inside edge of the bathtubs to create the appearance of an undermount tub. This approach produced an application that was both aesthetically pleasing and easy to clean. KERDI-BAND waterproofing strips were installed on the wall above the platform to protect the gypsum board from intermittent water exposure and covered with tile that complements the look and feel of the granite. The entire assembly was integrated with the adjacent shower waterproofing system to provide the most reliable solution and ensure long-term performance. These bathtub platforms are perfect examples of what can be easily achieved when the tile setter has complete control over the substrate and builds it to suit the specific needs of the application. 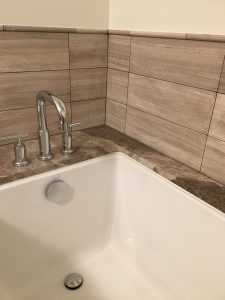 The granite was fabricated to leave a reveal of approximately 1/4” to create the appearance of an undermount bathtub.

The showers were waterproofed using the comprehensive Schluter®-Shower System. For the walls, 1/2″ or 5/8″-thick KERDI-BOARD was fastened to the steel framing, depending on the thickness of the adjacent wall board. For such areas within the shower, KERDI membrane was applied over the gypsum board. All seams and fastener penetrations were sealed with the KERDI-BAND waterproofing strips, and the showerhead and mixing valve were treated with the KERDI-SEAL-PS/-MV seals to complete the wall applications.

Zsolt appreciates the ability to use the foam board directly over the framing or the membrane over wall board previously installed by the GC. In general, he said, “I really like the flexibility of the system.” The bases were constructed using the prefabricated KERDI-SHOWER tray and KERDI-DRAIN and waterproofed with the KERDI membrane. Similar to the bathtub platforms, custom shower benches and curbs were built using KERDI-BOARD and sealed to the rest of the shower waterproofing system.

Using foam building panels to create substrates for tile can produce excellent results for everyone involved in the project. The end user receives a high-quality installation. The tile setter can earn higher margins while maintaining a fair price in his or her market as a result of being more efficient and productive on each job. And the general contractor gets an efficiently-run project with consistent, reliable results.