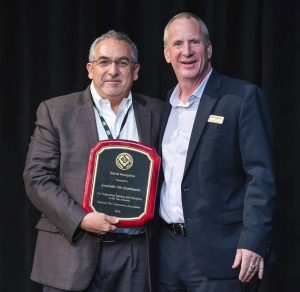 Robert DeAngelis (l) with Bart Bettiga at the Total Solutions Plus award ceremony.

Louisville Tile, headquartered in Louisville, Ky., is a leading distributor of tile installation products and sundry items for tile installers. Currently, the distributor has 13 showrooms, located in Kentucky, Tennessee, Indiana, Ohio, and Michigan.

“NTCA realizes that without the support of distributors and manufacturers we would be limited in what we do to positively impact the industry,” Bettiga said. “It’s because of this reason we decided to thank and honor the leaders at Louisville Tile Distributors for their continued support of our programs.”

For several years, Louisville Tile has hosted and sponsored NTCA workshops at all of its locations. At many of these events, the distributor goes a step further by purchasing copies of the NTCA Reference Manual and the TCNA Handbook for Ceramic, Glass, and Stone Tile Installation and the offering them to attendees. DeAngelis said he felt it was important that attendees left with these resources saying, “That puts the power of first-hand knowledge in their hands.”

DeAngelis said while it was nice to be recognized for Louisville Tile’s efforts support NTCA, he felt in reality it was NTCA that was supporting Louisville Tile in its education efforts. Two years ago, Louisville Tile leaders decided that in addition to being a workshop sponsor, they would also sponsor and host NTCA Regional Training Programs in effort to expand the ways they provided specialized training to local installers and their customers. Louisville Tile even added an additional member to its team in order to be able to offer more training. “By adding Marc Mularoni –our Director of Technical Sales– as a full time technical person, we added a person with the dedicated ability to step up our educational offerings in partnership with NTCA, CTEF, and other industry resources,” DeAngelis said.

Bettiga offered the distributor his sincere thanks for its support and efforts over the years and hopes its example will encourage other distributors to do the same. “Louisville Tile offers us an example of the difference an independent distributor can make in the industry through its support of installer certification, training and education,” he remarked.

DeAngelis also commented about the importance of being an industry education sponsor. “Our business is driven by the tile installation trade and businesses,” DeAngelis noted.  “It is more than a contribution to our industry; it is a necessity for continued health, growth and improvement of the tile trades that support our industry.”