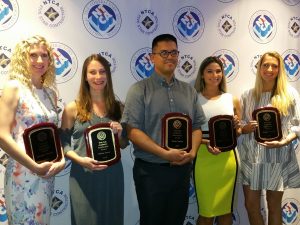 This program was established by the NTCA to provide educational opportunities at the ​college or trade​ level​ for children or grandchildren of NTCA contractor members. It was respectfully named after Tom Ade of Filling Marble & Tile in New Jersey, a former NTCA regional director and a previous recipient of the NTCA’s Ring of Honor and Tile Person of the Year Awards. Through his generosity and selfless support of NTCA ​training and education, this scholarship program continues to thrive.

S​cholarships were presented by Bart Bettiga, NTCA’s Executive Director, during the Association’s Awards Night on May 10th to five students, selected out of 37 nominees.  ​Bettiga commenced the presentation by declaring​,​ “This year, the NTCA is giving $20,000 to highly deserving students. Due to such outstanding entries, the NTCA decided to award $4,000 each to five individual students.”

The winners are as follows: